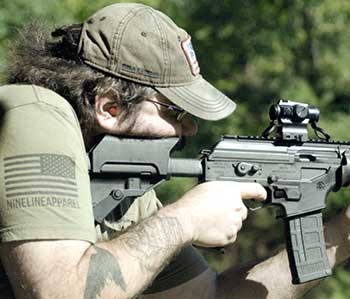 Donald Stoak, one of IWI’s Senior Gunsmiths, is a self-proclaimed “outdoorsy” kind of guy. With a true passion for guns and the process of creating an IWI rifle, Donald loves being a part of the team.

“I also like working at IWI for the people and the atmosphere,” Donald said.

Donald’s love of firearms made it difficult for him to choose a favorite, but eventually was decided on his top choice.

“Galil Ace 7.62×39 rifle, because of its proven operating system and general simplicity.”

His favorite part about working at IWI are the daily challenges, which add an interesting edge that keeps the job exciting.

When he isn’t working, Donald is fixing machines. His favorite to work on is cars, but he’ll fix anything with a decent engine and wheels.

As someone who loves the outdoors, you can often find Donald camping, hunting, canoeing, and going off-road trail driving.

We are incredibly grateful to have Donald on our team. He brings ingenuity, efficiency, and passion to his job, and he has become an invaluable member of the family.