From the Frontline to the Homefront: Meet Tom Alibrando 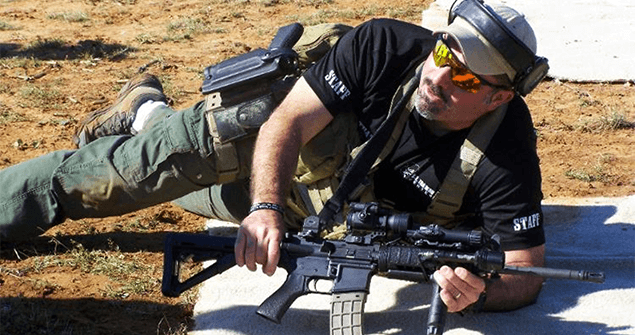 Tom Alibrando served as a police officer, instructor and special investigations officer with the Prescott, Arizona Police Department for 10 years. He also toured Iraq and Afghanistan, serving with the Department of State/Blackwater in a protective detail, as well as an intelligence specialist, assistant team leader and foreign national trainer. Tom was also the program manager for training for ACADEMI Training Services.

The choice of Tom Alibrando as our new National Law Enforcement Sales Manager was an obvious one. Learn more about the newest addition to the IWI family in our latest interview.

What’s your proudest achievement in life?
I would say having a great wife and great kids. Without the support and patience, particularly of my wife, it would have been more difficult to move onto my other objectives of SWAT, deploying overseas with Blackwater, moving to Virginia and now to Pennsylvania.

Who are your heroes in real life and why?
My hero growing up was Chuck Yeager. An ace in WWII, test pilot and the first man to break the sound barrier. He was a combination of intelligence and grit, cool under pressure—all the things I admire.

What would you die for and why?
I never walk into something thinking I’m going to die. I don’t let my students use that word in training. We never say die. I’d rather look at things from a perspective of what would I make someone else die for. I fight for my family, teammates—and by teammates, I mean all those I worked with in law enforcement—and those overseas. Enemies of those groups can do the dying.

What was the most important life lesson you learned during yout time in Iraq and Afghanistan?
There was probably a lesson learned every day. One lesson I learned is that the team is only as good as its people. Fortunately, I worked with a lot of talented people. I tried to learn as much as I could from them. Some lessons had to do with the job, others were lessons in character. I cannot speak highly enough of those men and women I had the privilege of working with.

What do you see as IWI’s edge over other companies in the firearms industry?
IWI’s battlefield origins have forced it to think outside the box. There’s a lot of forward thinking and we really do listen to feedback for constant improvement. IWI seems to put good ideas into practical application very quickly. They don’t have the luxury to sit on good ideas over there. They test them in the battlefield and if they work, they use them.

What’s the biggest advantage an IWI firearm gives to law enforcement?
I wish I’d had one overseas. The ability to maneuver it around vehicles while maintaining the velocity of the round is a big bonus. Its compactness makes it desirable for low profile operations as well, especially in the protective ops community. The longevity and ability to repair and replace parts with minimal tools is also desirable from a field deployable perspective.

What’s your favorite IWI firearm and why?
The TAVOR® platform. It’s what drew me to IWI a few years ago in the first place…and I don’t like bullpups, but I really like this one.

How has your experience in Blackwater, as well as in law enforcement and as a weapons and tactics expert, prepared you for this role?
I think based on what I’ve done, I can speak the language and understand what the end-user needs. It may come to a point that they don’t need what we have, and I will be honest about that. At the end of the day, we support them. Their safety has to be the priority.

What’s the most interesting thing you saw when you were in law enforcement?
While on routine patrol I observed a white pickup truck with camper shell in front of me and it was weaving all over the road on a major highway in broad daylight. I could see through the back window a lot of animated hand movement, so it appeared to be an argument of some type. Thinking it might be a domestic dispute, I pulled the car over and asked for backup. After approaching the driver’s side window, I asked what was going on. It was then I discovered that both occupants were deaf and having a heated discussion. To form some of the words, the driver had to use both hands which is why the car was weaving. They could read lips so I asked them to not talk and drive as much. No citation was issued and they went on their way.