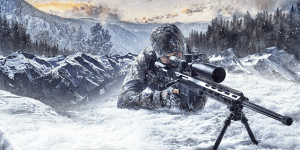 Anciently, in defense of its people, the tribe of Dan defeated the Canaanites, razed the city of Laish to the ground and then built the city of Dan in its place. Likewise, the IDF’s DAN® .338 Tactical Precision Rifle deals swift justice to all those who fight against Israel, freedom and goodness.

Not only is the rifle used by the IDF, but British SAS have also been using it to take out members of ISIS. The DAN® is a lean, mean, fighting machine with a 28-inch heavy-fluted, free-floating, cold-hammer forged barrel that features a 1:10 twist and a 5/8×24 TPI threaded muzzle. The 10-shot platform ships with a pair of detachable mags, an Atlas bipod and Accu-shot monopod to help provide a steady platform. To conserve weight, the rifle uses a lightweight aluminum alloy chassis and a skeletonized side-folding adjustable buttstock. The DAN® weighs in at svelte 15 lbs. Generous Picatinny rails run top, bottom and both 3- and 6-o’clock positions for aftermarket optics and accessories as the rifle ships sans sights or glass. The DAN® has sub-MOA accuracy at range of 1200 meters. But best of all, it’s here, right now, in the U.S!

“We’ve been really surprised by the demand for the DAN® .338 Rifle. We were only planning on ordering a few but will definitely have to increase our inventory. Not surprisingly, we’re getting a ton of orders from guys named Dan, who I suspect just have to have a rifle with their name on it,” said Michael Kassnar, VP of Sales and Marketing for IWI US.