UZI® Pro: A Symbol of Freedom is Back 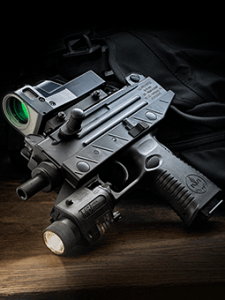 For many Israelis the UZI® symbolizes freedom. In fact, it was adopted by the IDF just three short years after the nation of Israel was created and the Jewish people had been returned to their homeland after the defeat of Hitler. Ever since then it’s been used to defend the lives, freedom and country of Israel.

During the Six Day War when all hell broke loose on June 5, 1967 and Israel was attacked from all sides, the UZI® was there. Its compact size and firepower was instrumental in clearing bunkers and enemy defensive positions.

Not only did the UZI® fight for freedom in Israel, it fought for freedom and defended people in over 90 countries worldwide. Almost every law enforcement agency or military has adopted it at some point. With over 2 million units sold, it’s the most popular submachine gun ever. 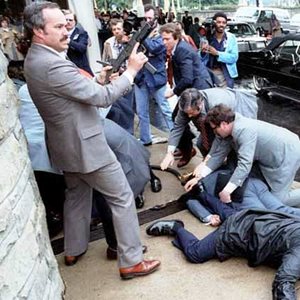 Part of what’s made the UZI® so popular is the heavyweight punch it packs into a compact body. This is made possible by its revolutionary bolt which allows the magazine to be stored in the pistol grip and the long barrel to be housed compactly. Its unique folding stock can instantly give the gun rifle-like stability and accuracy. These characteristics made it the preferred weapon for diplomatic protection by the U.S. Secret Service for decades.

On March 30, 1981 when John Hinckley attempted to assassinate Ronald Reagan and the streets of Washington D.C. became a mass of chaos, the Secret Service was there with the UZI® (seen above right) to protect the rear of the President’s limo as it sped to safety. Secret Service members kept an UZI® concealed in a briefcase and deployed it within seconds of the attempt, foiling any further attack and keeping the President safe.

The UZI® has fought for freedom and defended liberty for over five decades. Through the years it has gone through many evolutions, from replacing the original wooden stock with the rapid deploying folding metal stock to the introduction of the Mini UZI® and later the Micro UZI®. Today, IWI US introduces the world to the UZI®’s newest generation of freedom fighter, the UZI® Pro.

Based on the famous UZI® SMG, the UZI® Pro is purpose-built with only one goal: uncompromising performance and reliability on a simple and robust design. This 9mm Luger Parabellum semi-automatic version for the American public features an advanced polymer pistol grip that incorporates an integrated magazine release button for fast and easy magazine changes. The cocking handle is located on the receiver side, allowing for a full-length Picatinny rail on the top receiver cover. A short Picatinny rail is also mounted below the barrel for additional accessories.